Growing back to their roots 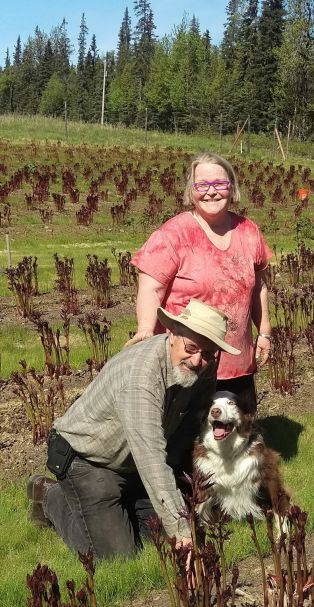 As Patti Floyd talked about all she and husband Wayne Floyd have accomplished with Cool Cache Farms these last few years, she peered out a nearby window and was nearly overwhelmed by the scene.

“We’re part of a growing business and our house sits near a lake in such a beautiful place,” Floyd said. “Who doesn’t dream of such things when it comes to building a life and a business in Alaska?”

The business is also the couple’s NOW.

“We thoroughly enjoy what we’re doing,” said Patti, who like Wayne is in her early 60s.

The farm features an acre and a quarter of land. The Floyds focus their energy on growing world-class peonies, rhubarb and other produce as well as raising rabbits and poultry. But it’s their ability to produce peonies found in few other places that’s really led to the business’ success.

“Alaska is a premier growing place for peonies and other items, and the world just started discovering us in these last few years,” Patti said. “Our cool climate and long sun-filed days produce an absolutely exquisite blossom.”

Patti and Wayne each grew up on farms and met in college at Washington State University, where they both studied agriculture.

Once married, the couple grew tired of the “urban sprawl” of the Lower 48 and relocated to the Kenai Peninsula nearly 30 years ago.

Patti worked for the state until 2005, and Wayne as a teacher until 2014. He also retired from the Alaska Army National Guard as a first sergeant nearly 13 years ago.

“Little did we know that our Alaska adventure would literally take us back to our farming and agricultural roots,” Wayne said.

“I was amazed with what I learned about the growing potential,” Patti said. “When I shared the information with Wayne, he was game. After the conference, we quickly started clearing, tilling and preparing the land. We then began to cultivate it.

“It’s been quite the fun roller coaster ride since.”

Historically in most places, peonies complete the growing process around Memorial Day. Patti learned of the frustrations of florists and future brides who still sought those blossoms later in the summer and into the fall season.

“It didn’t take long for us to realize we could operate on a different time frame,” she said. “We can provide blooms at high-demand times like no one else.

“I started telling friends to not let family members get married until July or August. We’d certainly ship peonies to them all.”

Shortly after they arrived in Alaska, the Floyds opened their first account at First National Bank Alaska.

“We found the bank right there on the road as we came into town,” Patti said. “And we’ve never had a reason to leave.

“From the very start, the bankers have always been wonderful and have taken a keen interest in what we’re doing.

As the farm started to take shape, the Floyds leaned on First National Loan Officer Junie Steinbeck, Operations Supervisor Julie Wheeler and other local bankers to meet their financial needs. When an opportunity came about to purchase shipping boxes from another local farmer and the Floyds asked, the bank provided loan assistance.

"Watching Patti and Wayne follow their passion and build something special has sort of left me awestruck,” Steinbeck said. “I grew up in a farming community, so I know how hard they work.

“They aren’t just out doing something as a hobby. What they’ve accomplished is so unique.”

“First National has offered us so much expertise in terms of financing and peace of mind,” Patti said. “Our Kenai Branch is the kind of place where everybody knows your name when you walk in. The people there are so friendly.”

During the busy summer months, the Floyds find that Cool Cache Farms is always bustling with traffic, tourist and Alaskans alike. Patti also spends a couple days a week selling peonies, rhubarb, jams and jellies and other farm-produced products at nearby farmers’ markets.

It’s not unusual for her to meet new people and personally invite them to Cool Cache for a visit. Some even come bearing gifts for their new Alaskan farming friends.

“Last year, an Anchorage family down here dipnetting came over while they waited for the tides,” Patti recalled. “They’d already been fishing and delivered four fresh fillets to us.

“Memories like that remind us of how blessed we are to be in Alaska. This is our retirement and we love it.”