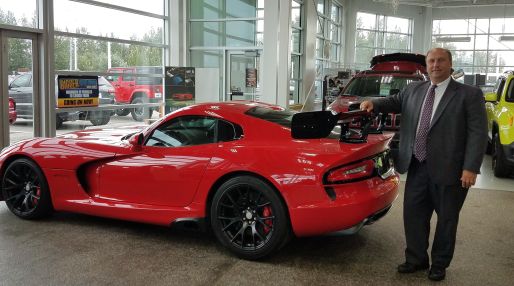 For as long as Lane Nichols Sr. can remember, the beauty of driving cars sparked one singular emotion.

“The ultimate and amazing feeling of freedom,” Nichols said.“Cars and driving can take you anywhere, providing entertainment and personality in your life.

“Think of it. Some of your fondest memories are often connected to cars, getting that driver’s license as a teenager, maybe going out with friends or spending time with a special someone on that first date.”

Nichols loves his cars and loves selling cars to his customers at Gene’s Chrysler Jeep Dodge RAM in Fairbanks. He’s owned the 72-year-old business since 2004.

But a few years back, Nichols and the company ran into a bit of trouble related to financial security and fraud. Gene’s didn’t bank with First National Bank Alaska at the time. But after meeting with the bank’s security and banking experts, the company made the switch to First National. The bank has helped drive the car dealership forward since.

“First National has been right here by our side for quite a while,”Nichols said.

“Trust in our bank”

In 2009, Gene’s was operating as usual with Nichols and his team making sure every customer left the lot completely satisfied with their car-buying experience.

But the day came when a sizable amount of money was stolen from one of Gene’s business accounts at a financial institution other than First National. Hackers found their way through the Automated Clearing House (ACH) system and took a sum totaling six figures.

“The entire experience was a little stomach-churning,” Nichols said.

Nichols tried working with the other financial institution but quickly grew tired of the limited answers and results.

“We were running out of options,” he said.“It was all very frustrating.”

Insurance helped Nichols and the business recoup some of the lost funds. Nichols had done much of his personal banking with First National for years, so he turned to Johansen Branch Manager Pam Wentz to see what the bank could do for the business.

“Lane reaffirmed his trust in our bank and I knew bringing Don in with all his expertise would be the right thing to do,”Wentz said.

After spending more than 30 years in law enforcement where he once specialized in combating white-collar crime, Krohn joined First National’s ranks in 2002. He quickly developed and implemented programs that resulted in an 80 percent reduction in criminal attacks against both the bank and its customers.

Krohn, Wentz, First National Product Support Manager Mike Mason and other bank experts asked Nichols and his staff to answer questions about the way they ran the business and their data security practices.

“We studied Gene’s computer systems and the way they handled financials,”Mason said.“We instructed them to use separate servers for financial needs so they might be further protected.”

“We also taught them about the importance of check signatures that aren’t as easy to forge and types of protective ink that are more difficult for the crooks to wash,” said Krohn.

Nichols and his staff learned a lot about the ins and outs of cyber security and fraud prevention.

“Don and his team knew so much about a lot of factors,” Nichols said.“The level of expertise First National provided me and the dealership was spectacular.”

Krohn was quick to reassure Nichols that he and the business’s employees were doing the best they could at the time; Gene’s has since greatly strengthened security measures.

“As bankers, we work in this arena and know how to avoid falling victim to the criminals,” Krohn said. “Customers like Lane are busy running a successful business and can’t possibly realize all the tricks the crooks are now using. It’s an education process.

“Most of us want to believe people are honest. It’s our job to work with customers to stop those who aren’t.”

Nichols and Gene’s adhered to the plan Krohn and First National created. The company changed policies and procedures. Business has since cruised along nicely.

“We’ve been improving every day on what Don and the bank taught us,” Nichols said.

Gene’s priority is building long-term relationships with its customers, much like First National.

Wentz applauded the company for being an integral part of the Fairbanks community since the business first opened its doors in 1945.

“Lane Nichols Sr. and his employees aren’t the kind of people expecting recognition for all that they do,”Wentz said.“But they have been a huge part of Fairbanks for a long time. They really give of themselves.

“It only makes sense for First National to have their collective backs, day in, day out.”